A brief update on our "Special Edition" offering of 600.355: Video Game Design Project with MICA. Today we had Dan "Delta" Collins as our guest speaker. Dan gave a great talk about simulating the core mechanics of a game to determine how well-balanced everything is. A lack of balance leads to players ignoring certain options because they are not helpful in "winning" the game, which in turn means that (as a designer) you wasted a lot of effort adding things that nobody actually wants in play.

After his talk Dan went around to each team of students and tried to "extract" the core mechanics of their games in order to give them feedback and advice about how they could approach a simulation for their paper prototypes. Here are a few snapshots of this process: 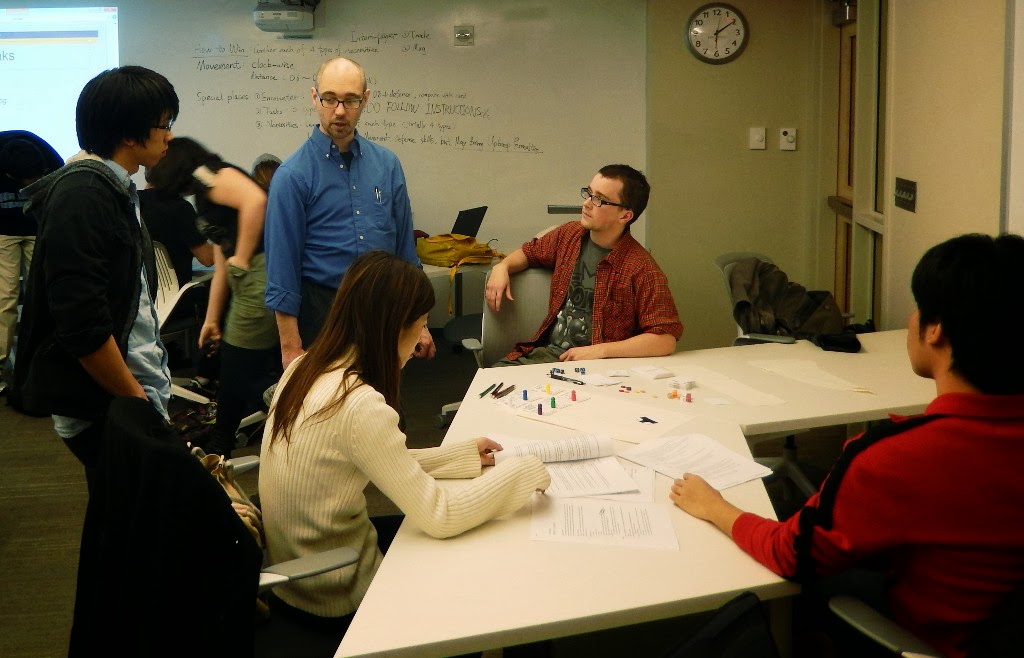 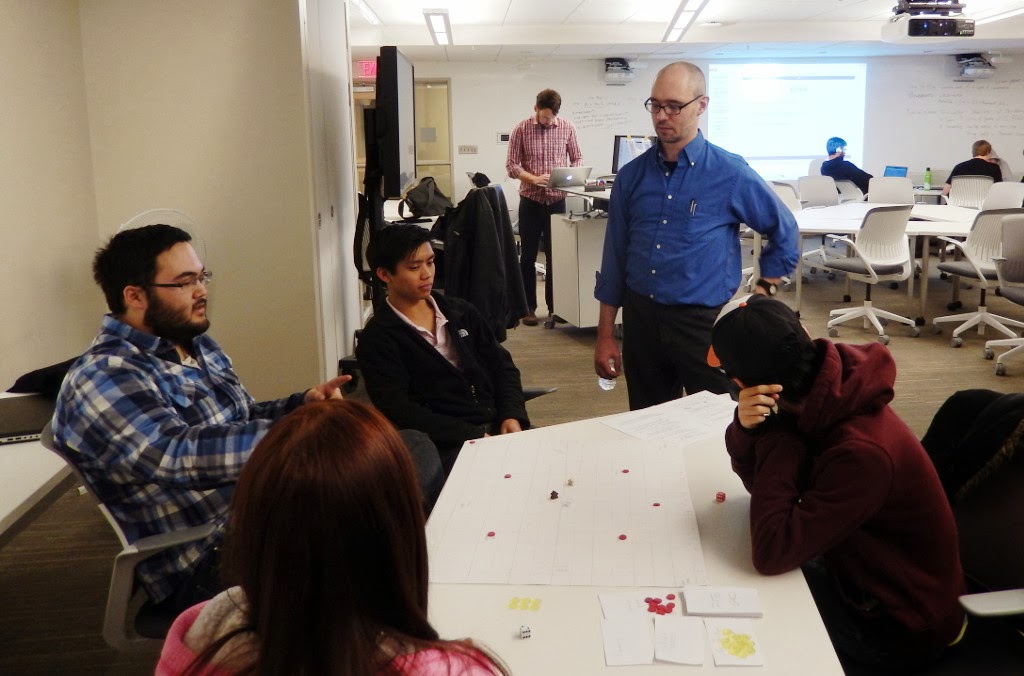 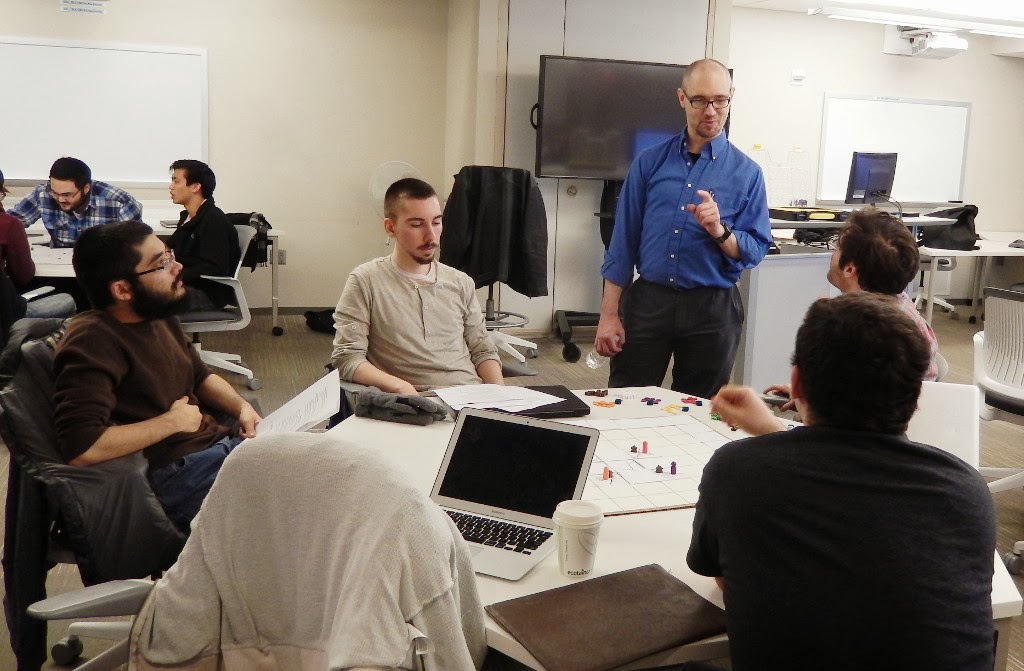 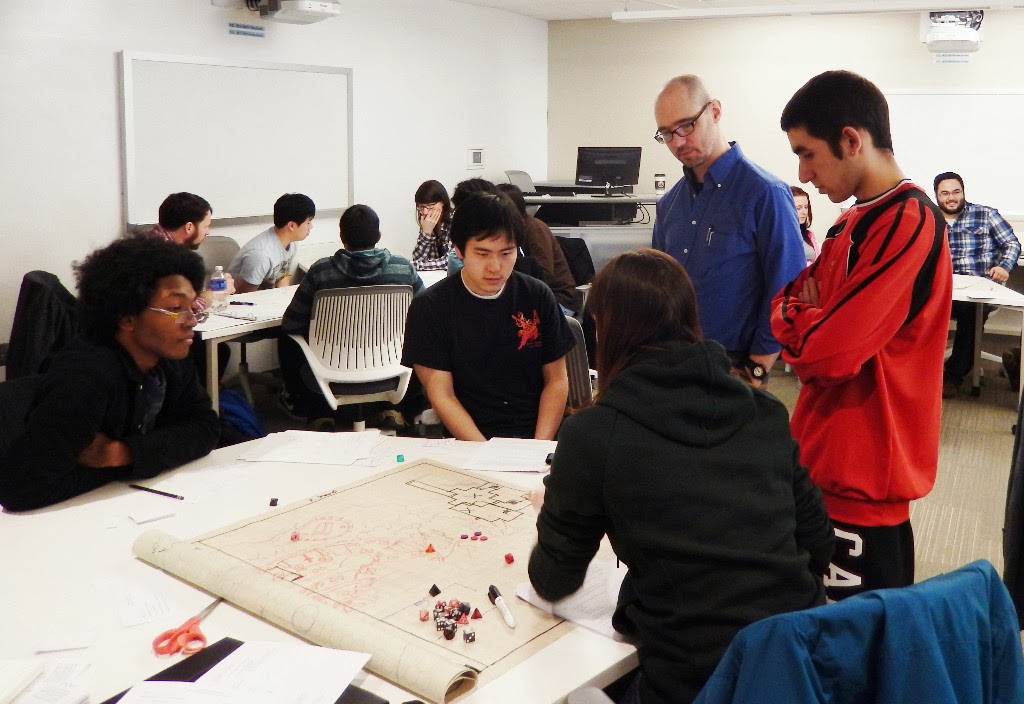 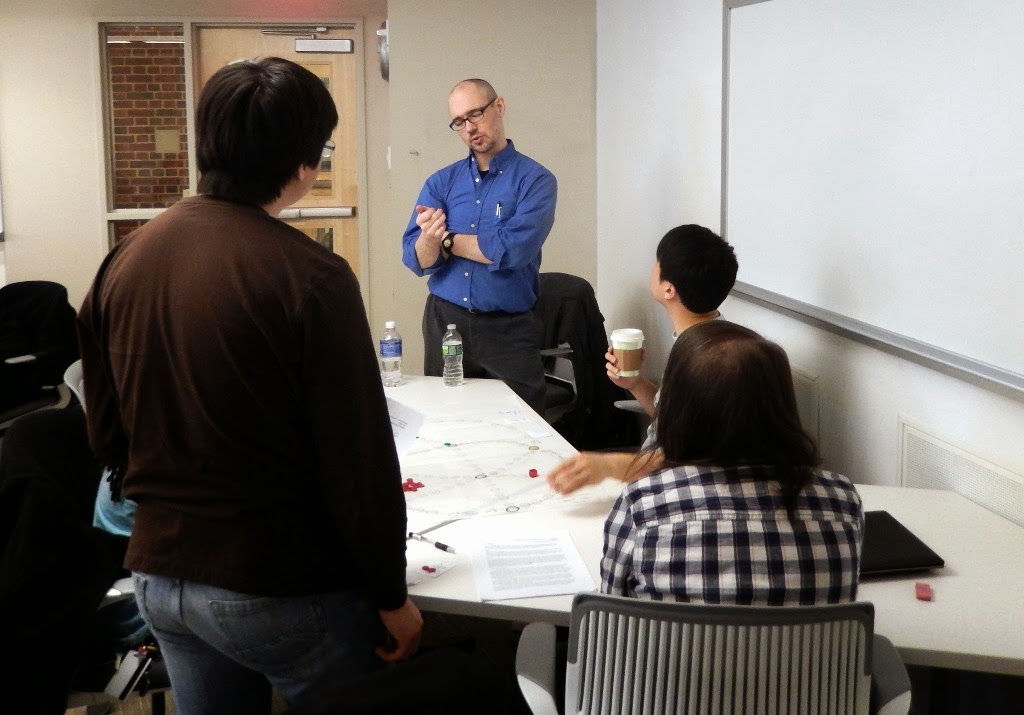 For next week the students have to put together basic simulations of their central "encounter" or "conflict resolution" mechanic to determine if the options they are offering to players are all more-or-less attractive and should therefore stay. Our hope is that this process will help them further refine and simplify their rules, so that next week's final playtest will be a huge success and enable us to hand out lots of A grades for excellent paper prototypes.

This is the first time we're using the idea of simulating game mechanics in order to analyze the balance of a game design in a course, so it was really helpful to have an expert on the subject to introduce the basic ideas behind it. In the future we hope to expand this approach and present it earlier in the course to allow students to use it repeatedly to iterate on their designs.

Thank you Dan for coming all the way down from NYC to help us out! We hope you enjoyed your visit as much as we enjoyed having you.
Posted by Peter Fröhlich at 6:19 AM 1 comment:

I have been teaching gaming courses at Johns Hopkins for a while now, but this semester we're kicking things up a notch. Our usual 600.355: Video Game Design Project is being offered in a "Special Edition" which means that I am co-teaching it with Jason Corace from MICA. Jason is bringing half of the students for the course from MICA as well, and they are injecting some "groovy art school atmosphere" into the otherwise "cold rationality of engineering" that JHU can be.

The "classic" 600.355 course is focused entirely on developing a sizable video game, but for our "Special Edition" we're doing things very differently. Students start by developing a "paper prototype" of their game to study game mechanics. They then simulate those mechanics to ensure that the game is well-balanced and finally turn the essential ideas and mechanics from their "paper prototype" into a corresponding "digital prototype" for which the engineering students will focus on software development while the art students will focus on the artistic direction of the game. All of them are, of course, responsible for the entirety of the final game they produce together. Now that's how you do an interdisciplinary course!

Tonight we had the first round of playtests for the paper prototypes and I seized the opportunity to take a few snapshots of the "organized chaos" this entails. The first hour was dedicated to each team setting up their games and making some last-minute changes to their rule sets:

If you have not caught on yet why this Computer Science course is a little different, maybe this picture will do the trick:


After the initial hour of prep-work we started the two rounds of playtesting. One person from each team "stayed behind" to observe what another team would do with their game. The "observers" were encouraged to really observe and only speak up to help the testers if they were really stuck on some iffy part of the rules. Here's how the first round went down:

After 30 minutes each team did a 5-minute debriefing with the observer and then everybody moved on to another game for round two:

We did allow for small adjustments between the playtests, and for several games that led to a much more satisfying second round. So our students saw first-hand how playtesting can improve their games, and we hope that by next week they will incorporate all of the feedback they received and arrive with suitably streamlined and even more enjoyable games.

And they better, because next week we're hosting Dan "Delta" Collins as a guest lecturer and he will be looking at each of their games in detail with his excellent eye for weak mechanics and shoddy design. And I've encouraged him to not hold back and be as cruel as he needs to be with his feedback. Good times!

Just in case you couldn't tell yet, I am having a great time co-teaching this "Special Edition" course, and I hope that we can get MICA and JHU to regularly offer something like this, a course that builds bridges between very different educational worlds and helps our students understand what it means to work on truly interdisciplinary teams.

And the best thing? Class officially ended at 7:30 pm but the first student asking "Wait, are we out of time already?" did so at 7:45 pm. I think they are having fun as well.
Posted by Peter Fröhlich at 6:58 AM No comments: