I've been meaning to run a sandbox campaign for a while now and tonight I sat down for a little while with the free version of Hexographer and The Welsh Piper's campaign design tutorial. Here's what I have to show for about two hours of thoroughly enjoyable work: 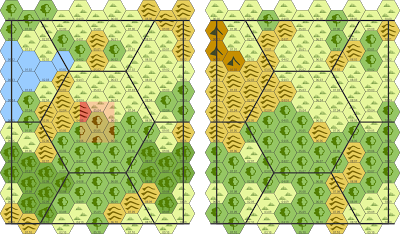 Did I end up with a particularly cool map? No. Is it good enough for a trial-balloon sandbox? I am pretty sure it is!

Note that I tried to follow the tutorial to the letter (yes I actually rolled dice for the left map), so I guess this also shows that Erin's method produces fairly decent outcomes. (Of course his method is not an exact algorithm, you do have to tweak things here and there to make it work.)

Next I'll have to populate the maps. Erin has another tutorial for that, but as far as I can tell his method will produce too few adventuring sites for my taste. So I'll probably just populate manually, or maybe by stealing ideas from other sandboxes I have access to. We'll see.
Posted by Peter Fröhlich at 9:45 AM

The content of this blog is licensed under a Creative Commons Attribution-ShareAlike 3.0 Unported License. The views expressed in this blog are my own and not the views of my employer.